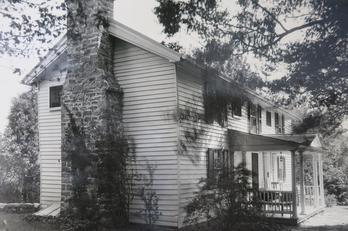 The following is a note from Henry F. Wallace to his daughter Naomi written in 1981 about houses on the hill where the family resides.

“Naomi and Bruce’s cabin on the hill has an interesting history also. The central room is a one-room frame cabin, built by Tom Wallace at the Louisville Boat Club at the turn of the last century. When Tom Wallace married Augusta Graham French, from Philadelphia, and bought Moncada Farms (then called Ronda Farm), he “loaded the cabin on a wagon and pulled it here from the boat club by four strong horses.”

Moncada Farms "began as 87 acres in Prospect", bought by Tom Wallace in 1911.  Here is what Henry Wallace writes about this purchase:  “The main house had no running water or central heat or electricity. The road up the hill was so bad that when it was muddy during or after a rain the horse or horses couldn’t pull the buggy up the hill.  The solution was to leave it in a shed built for that purpose at the bottom of the hill and ride the horse up to the house.”

Back then, the house was “...just log.  It was in two parts.  One was for living, eating etc.  But between the main house and the kitchen…was an open space called a ‘dog trot.’”  Thus the owners of the house “weren’t inconvenienced by the smoke and heat of the kitchen…Just behind the kitchen was a one-room log cabin with open fire.  It is today the heart of the extended cabin.”

“By the time my father bought the place in 1911, the old log walls had been boarded over—weather board, they called it-- and the dog trot was roofed and walled.  But the smoke house was still there…and an ice house was situated where the garage now stands.”

“…Where Jerry’s shop now stands was a barn. There we kept riding horses and the horses that pulled the buggy and sleigh. In the winter of 1917-18 snow came in December and stayed without thaw until March. I remember my mother hitching up her horse she had sent from Philadelphia when she married…His name was Cobbler and my mother often road him side saddle…When the weather was fair we would ride the buggy, with Cobbler in the shafts, to wherever we wanted to go in the community. I loved those outings behind the horse.”

“After a few years my father had a road built from Rose Island Road to the house, an engineering feat that got us out of the mud.  Shortly after, he drove home in a brand new Ford, which cost in those days around $375.00. Then I got my first ride in an automobile.”

In those days, “…much of the farm work was done by two fine Belgian horses, Charlie and Robin, who died within a day of each other at around thirty years of age.”

“My mother and father died in the spring of 1961, within a month of each other.” 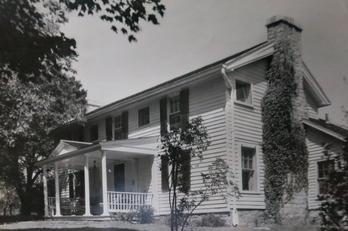 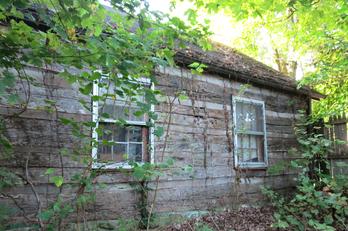