Henry’s Ark is a “30 acre outdoor classroom” created in the late 1980's by Henry F. Wallace as an educational experience for the community. Henry always had a plethora of animals living with him on the farm, all rescues and pets. He found that his children loved the animals as much as he did, and they made great babysitters when the kids were young. Henry had skunks, raccoons, goats, bison, sika, pigs, deer, birds, dogs, cats, cattle, and many others. He purchased his first exotic animal - a camel- in 1991. The herd grew with the acquisition of zebra, ostrich, and numerous exotics. Henry created the zoo so the public could more easily have access to all of the animals. 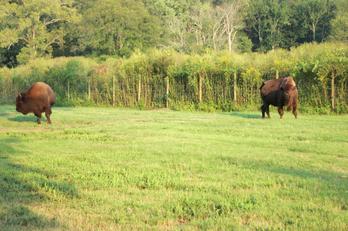 Henry’s Ark has been featured in People Magazine, Reader’s Digest, The Courier Journal, and The Oldham Era.